Day One of the AFT biannual National Convention got off to a rousing start. Delegates and visitors from all across the nation convened on Minneapolis, MN, for the 100th anniversary of the organization (#AFT100). Members kicked off the morning with a breakfast hosted by the Baltimore Teachers Union. AFT-Maryland President Marietta English addressed the breakfast and laid out what the members from Maryland could expect moving forward during the convention.

The convention proper kicked off in a rousing fashion with President Randi Weingarten’s state of the union address. Included in her remarks were a number of issues important to the union as a whole including the Friedrichs Supreme Court case and the question of fair-share, as well as speaking on matters of social justice. The question of social justice was important particularly for the people of Baltimore as on the opening day of the convention, Lt. Brian Rice was found not guilty of all charges. President Weingarten’s proclamation of “Black Lives Matter” found a rousing applause in the hall. 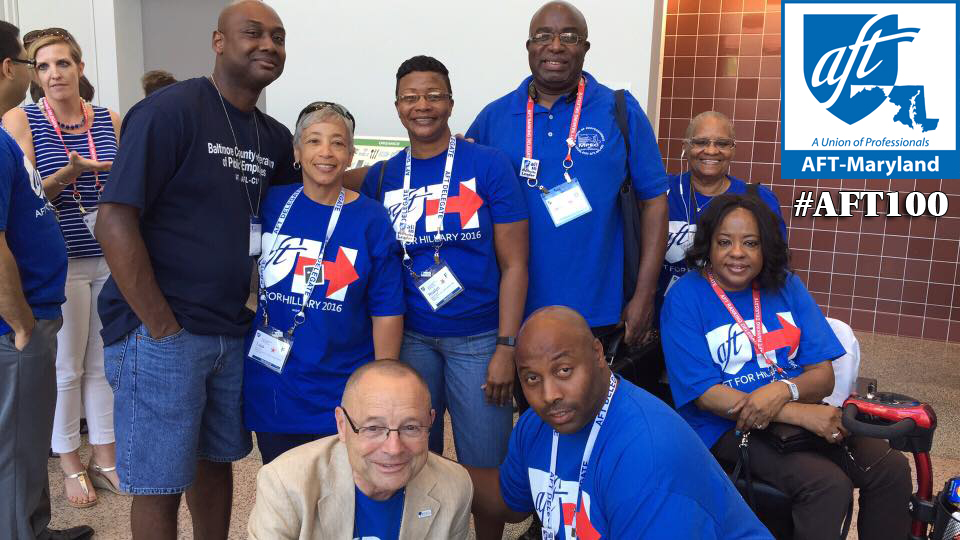 The highlight of the opening day however, was the speech by Secretary Hillary Clinton. Secretary Clinton opened her remarks by passionately discussing social justice and mentioning twin cities native Philando Castille, a black man who was shot and killed by a Falcon Heights, MN police officer during a traffic stop. She called on the need for racial justice in policing and for a call to calm tensions across the nation in the wake of gun violence against police and against civilian citizens. Clinton also addressed the need for a clear, comprehensive plan for public education. She highlighted her commitment to children from her time at The Children’s Defense Fund and as First Lady of Arkansas up to today. She says she runs public education by the test of would she want her child to attend. The audience for the most part warmly accepted the Secretary and gave her standing ovations before her remarks and after.

Following the business there was a reception where members from AFT-Maryland enjoyed food and drinks, good music and fellowship with their fellow AFT sisters and brothers. 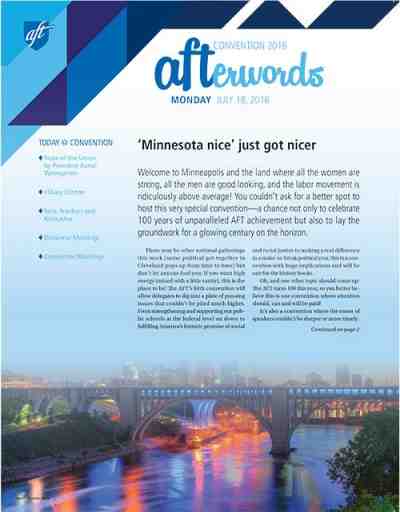 For more from Day One of the AFT National Convention, see AFT's daily convention newsletter, AFTerwords.