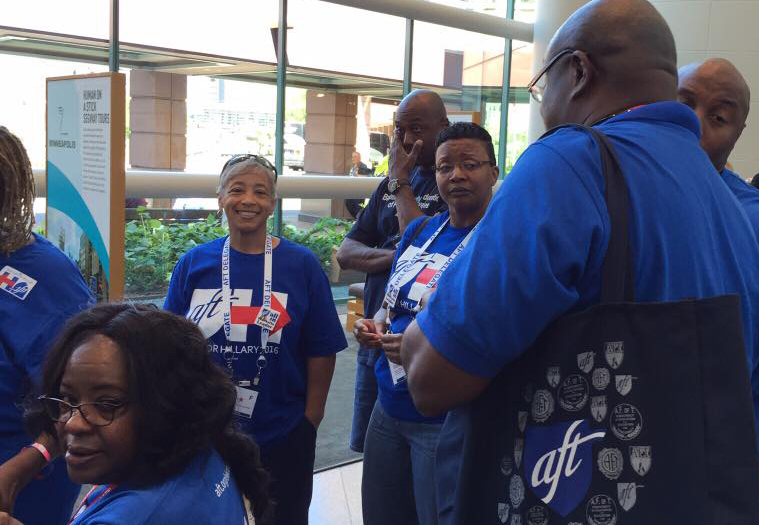 The second day of the AFT National Convention in Minneapolis, MN was one that focused on human and civil rights. Important national figures such as Rashard Robinson from Color of Change and Sybrina Fulton, mother of Trayvon Martin both addressed the convention. They spoke about the need for justice and calming of violence from police against citizens as well as retaliatory attacks on police.  They were well received and members were eager to hear from them; particularly Fulton, given the resilient strength she’s shown in the very public murder of her son. 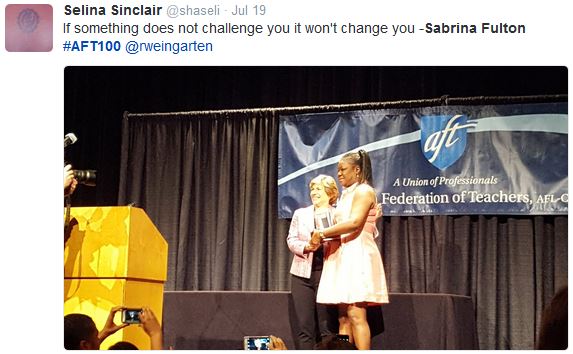 The action on human and civil rights didn’t end there, as there was a candlelight vigil for all victims of gun violence. Local activists took to the stage to express a call for a change in gun laws. One of the most compelling lines of the morning was when one speaker asked why it is illegal to hunt animals with assault rifles but legal in some states to use them on people. That line drew a rousing applause from the entire hall.
Congressman Keith Ellison also spoke to the crowd. He expressed frustration over the nuance that is often lacking around conversations about race. He lauded AFT’s history of racial inclusiveness over its 100 years. He also expressed how Black Lives Matter isn’t an indictment of any other group or discounting of anyone else, but rather an affirmation of the value of black Americans.

In that spirit, one of the highlights of the day was a protest organized by the Minneapolis Federation of Teachers as well as the St. Paul Federation of Teachers. This was an action in support of teachers for Black Lives that called on better and community controlled policing to ensure the safety and welfare of all citizens with a specific focus on the welfare of black citizens. This major action was largely supported by members across the nation standing in solidarity with the Minnesota educators.
A familiar partner for AFT-Maryland, Alliance to Reclaim Our Schools, addressed the convention to discuss its national Walk-In event. That will look very different in Baltimore, but the message is still echoed and supported in Baltimore and beyond for all of AFT.

Convention attendees from Maryland were thrilled to see one of our own members, Valentina Washington, a member from the Baltimore County Federation of Public Employees, take the stage as one of the AFT Everyday Heroes of 2016, in the Public Employees division. Winners from each AFT division were chosen, representing teachers, PSRPs, higher education staff and faculty, public employees, healthcare professionals, early childhood educators and retirees. Congratulations, Valentina!
Among other organizational business, convention Delegates approved a per capita increase on day two. Under an amendment adopted by delegates, effective Sept. 1, 2016, each local will pay a per capita of $19.03 per month (an increase of 80 cents over the current per capita), of which $1 will be dedicated to a special AFT response fund to engage members and assist locals in crisis. Effective Sept. 1, 2017, locals will pay a per capita of $19.28 per month, of which $1.10 will be dedicated to this special response fund. 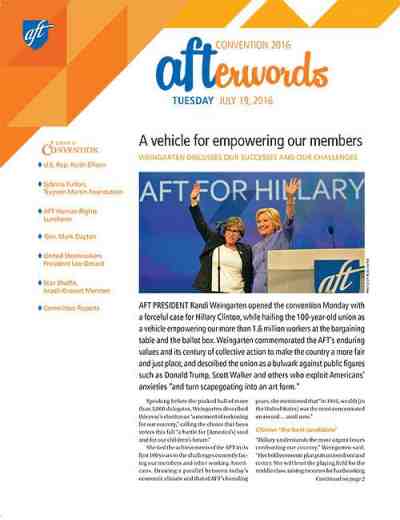